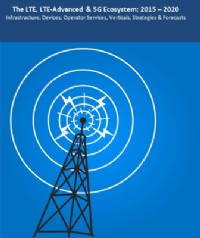 As a natural upgrade path for carriers from the previously detached GSM, CDMA and TD-SCDMA ecosystems, LTE has emerged as the first truly global mobile communications standard. Commonly marketed as the “4G” standard, LTE promises to provide higher data rates and lower latency at a much lower TCO (Total Cost of Ownership) than 3G technologies.

With over 380 fully commercial network launches, LTE has become a mainstream technology, and a number of wireless carriers have already deployed LTE-Advanced features such as carrier aggregation. The new report estimates that LTE service revenues will account for nearly $170 Billion in 2015. Revenues are further expected to grow at a CAGR of 30% over the next 5 years.

While LTE and LTE-Advanced deployments are still underway, wireless carriers and vendors have already embarked on R&D initiatives to develop so-called “5G” technology, with a vision of commercialization by 2020. 5G is essentially a revolutionary paradigm shift in wireless networking to support the throughput, latency, and scalability requirements of future use cases such as extreme bandwidth augmented reality applications and connectivity management for billions of M2M (Machine to Machine) devices.

The report comes with an associated Excel datasheet suite covering quantitative data from all numeric forecasts presented in the report.